In earlier posts, I have discussed the causes of depression.   Research indicates that at least one cause of depression is physical.  At the same time, depression is a complex illness and can also be caused by environmental factors such as abuse, conflict, major events and medications.

One of my doctors once told me that one of the signs of being an adult is being able to discard some of the things our parents taught us.  We don’t have to accept everything they told us as gospel. This was a relevation to me and allowed me to stop playing those tapes in my head — the tapes I had recorded when I was a child; the same tapes that damaged my self- esteem when I became an adult.

This got me to thinking about some of the crazy things my dad used to say to us.  Some of them were the typical things all parents say, like “don’t make me come back there!” and “stop crying or I’ll give you something to cry about!”

Some of his sayings, however, I have discovered to be unique to our family.  I guess every dysfunctional family can be unique in some ways.  We did not have some of the more typical types of dysfunctions such as alcoholism or physical abuse.  No, we suffered under a narcissistic bully.

My father was the oldest son in an Italian family, where the sons are treated like gods and the daughters like housekeepers.  My grandmother doted on my father.  My aunts also deferred to him, even though they should have known better, because he was cruel to them at times. They acknowledged this, but still deferred to him. For example, my wonderful Aunt Cecelia told us that she was leaving money to us via my father, because she knew he would “do the right thing.”  Needless to say, I never saw a penny.

When you grow up being treated like a king, you come by your narcissism honestly.  When I describe my father to my therapists, each one always has the same response:  my father was a textbook narcissist.  In layman’s terms, he was the king.  Like Louis XIV, the “Sun King”, he built his absolutism around his own person.  He was the sun, and we were the planets that revolved around him.  More accurately, however, we were his serfs.

Some of his sayings included:

“This is not a democracy.” 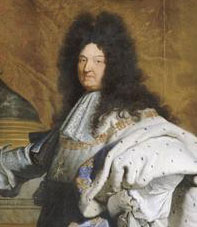 I’ve heard that some families hold “family meetings” where they discuss major decisions.  Yeah, we didn’t have those.  My dad often told us that our family was NOT a democracy.  Instead, my dad would say:  “this is a monarchy, and I am the king.”  In other words, he made all the decisions, and we followed along silently. He wasn’t joking when he said this.

Along with this saying, he would say that he had to be in charge, because if someone wasn’t in charge what would we have? “Anarchy,” he would say.

This worked when we were young, but once we become teenagers, we wanted to express our opinions, which was not met with favor, to put it mildly.  One of his other favorite sayings was “shut your big mouth.”  It’s too bad I didn’t know enough about King Louis XIV to point out what happens when a king fails to treat his subjects properly.  If I had, however, he would have slapped me in the face, as he often did.  In fact he tried to do so even when I was in my 30’s.  I learned not to sit too close to him.

Back when our country’s economy was built on agronomy,  families were large in order to ensure a work force capable of running the farm.  Kids helped out, and still do on family farms, I suspect.  But my dad did not grow up on a farm; he grew up in Hartford.  Nevertheless, this was one of his favorite sayings, usually followed by, “go do the dishes” or “go clean the bathroom.”

You know the saying “I didn’t ask to be born?”  I said that.  Once.  Slap.   My dad would tell us that we owed him because he did us the favor of giving us life.  Such good times.

I’m not saying that we shouldn’t have been required to do chores; that was not the problem.  The problem was how he told us to do our chores.  Instead of asking us, he barked orders at us.  If “earn your keep” had been said in jest or countered with kindness, we could have looked past this as an idiosyncrasy.  But it was not.  It was just one of many sayings designed to break us down and keep us in line.

“Rock music is just a fad.”

My dad hated modern music with a passion.   As a classically trained opera singer, he seemed to take rock music as a personal affront.  He claimed it was not music at all. In fact, any music composed after 1900 wasn’t really music.  He didn’t even like modern classical music. Yes, there is such a thing. Benjamin Britton was one such composer.  Dad didn’t like him either.  You can just imagine how much he liked the music my brothers were listening to–Black Sabbath, Ten Years After, Cream.

He hated rock so much that he would go to great lengths to suppress it. I mentioned in an earlier post about an incident that occurred in the 1950’s. My mother’s younger sister came to L.A. to visit. She bought Bill Haley’s “Rock Around the Clock” record and had the audacity to pollute my father’s turntable by playing it. He got pissed so he hid the record from her. She never got it back. I found the record years later stashed in among his collection of opera records.

In an effort to combat our preference for “modern” music, my dad would force us to listen to the New York Metropolitan Opera every Saturday afternoon. We had an intercom system with a radio, and he would turn it on full blast. If we turned the volume down, he would yell at us and say he was trying to teach us some “culture.” As a result of this force-feeding, I detest opera. I want to scream whenever I hear a soprano sing (not the James Gandolifini kind of soprano). He would have been so much better off if he had tried to encourage us to listen instead of forcing us to.

“Tennis shoes will hurt your feet.”

I never understood what was behind this. He insisted that tennis shoes (Keds, really) didn’t let our feet breathe. Yet they were made of fabric, which does breathe. It did not make any sense. In any event, I was not allowed to wear Keds to school unless we had gym. On other days, I was forced to wear these:

I kid you not. They were hideous. I had to wear them with dresses since the school did not allow us to wear pants unless it was snowing. This happened when I was probably 10 or so, which would mean it was around 1970. Can you imagine making a little girl wear these shoes every day?

I often wonder why he insisted I wear these ugly shoes. Was it part of his need to control? Did he not want any of us to outshine him in public? I really don’t know.

“Everything in this house belongs to me.”

For example, if we bought our own shampoo, he would take it out of our shower and replace our shampoo with the generic brand he bought. He would then use the good brand and force us to use the generic brand. Remember those black and white, no-name generic brands? That type of generic. No one dared take their shampoo, or any other item, for that matter, back from him. To do so was to risk physical punishment, or worse, as my brother found out one summer night.

My oldest brother worked as a bag boy at the commissary on post. The average tip back then was 10 cents per bag. 10 cents. Not much, but it added up if the bagboy hustled, which he did. And he rode his bike to and from the commissary as we only had one car, which belonged to—you guessed it, Andy.

My dad stole my brother’s money. When my brother confronted him, my dad called the cops. My brother ran into the woods before the cops came. He had received an appointment to the Naval Academy, and if the cops had arrested him, he could have lost the appointment. My brother never came home after that. He finished up high school living with some neighbors. He and my dad didn’t talk for years after that.

“And they wonder why they die.”

We would be in the car, and another driver would do something dangerous and stupid.  My dad would say “and they wonder why they die.”  I never thought about it much. When you look at it closely, it doesn’t make any sense.  If the person who dies is the one doing the wondering, how could my dad possibly know that?  Or did he mean that the families of the person who died wondered why the person had died?  That doesn’t make much sense either.  Oh well, I guess he had a little Yogi Berra in him. I’ll bet Yogi Berra let his kids wear Keds.

Please share your own parents’ sayings in the comments below.

2 thoughts on “Crazy Things My Dad used to Say”