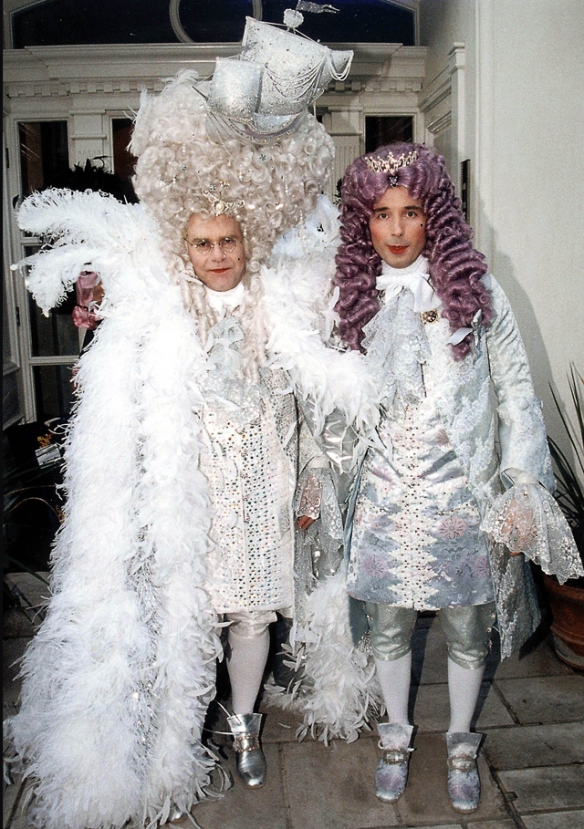 So what exactly is this “gay agenda” I keep hearing about? Right wing groups claim that gays are trying to shove their gay agendas down straight people’s throats. (I thought gays preferred to shove something else down throats, but no matter.)

As a devout Christian, I have a few questions about this so-called gay agenda.

Is a gay agenda like a business plan that gays have to draft and get approved before they can “choose” a gay lifestyle?      If so, who approves it? If a person’s gay agenda is not approved, does the person have to choose to be straight instead? Can they be waitlisted?

Or is a gay agenda more like a 10K report that’s filed with a commission like the SEC? If so, who is the chairman of the commission? Is it Elton John? If so, would it be ok for me to ask one of my gay friends to get his autograph? Preferably on a picture of him with David Furnish and the kids.

If it is filed like a securities report, is it available for public review? Can someone send me the link? Or do I have to file a FOIA request? I’d really like to see Neil Patrick Harris’ agenda; I’ll bet it’s as funny as he is.

What’s included in a gay agenda, anyway? Are there minimums or quotas, like sales targets? Do gays have to convince a certain number of straight people to choose the gay lifestyle every year? Do they get a bonus if they meet or exceed their quotas, like billable hours in a law firm? What happens if they don’t meet their quotas? Do they go on gay probation?

And if they keep failing to meet their quotas, do they have to go back to being straight? If gays choose to be gay (as opposed to choosing to be straight, which apparently is the norm, like being right handed — does that mean some people choose to be left handed?), it shouldn’t be that hard to switch back and forth. Elton John did it. First he was bisexual in the 70’s, then he chose to be straight in the 80’s and married a woman named Renate. (Different Renate; if he had married me, believe me, he’d still be straight). But then he divorced Renate and chose to be gay again. I think the real reason he switched back is because he likes wearing flashy, colorful clothes. Does that mean flashy clothes are part of the gay agenda? But not all gays dress like that. David Furnish doesn’t, most of the time. Neither does Alan Cumming. It’s all so confusing.

When gays are out promoting their gay agendas, do they get paid time off from work, like for jury duty? Does it qualify for FMLA? Or is it more like Mormon missionary work, only instead of wearing white shirts and black ties, gays wear infinity scarves and shirts with contrasting cuffs like Cam on Modern Family? If gays are trying to shove their agendas down straight people’s throats, how come I’ve never seen gays going door to door soliciting new members?

If I got recruited and chose the gay lifestyle, would I have to cut my hair really short? It’s pretty short already; will it suffice? Does that rule apply if I want to be a lipstick lesbian? Can I be a lipstick lesbian if I don’t like to wear lipstick? Would I have to listen to Melissa Etheridge and wear Birkenstock sandals? I’m not that crazy about either one. I do like Tevas. Could I wear them instead?

It seems like there are a lot of rules about being gay. Why would anyone “choose” this lifestyle in the first place? Wouldn’t gays rather be straight and get to hang out with fun people like Kim Davis? (Personally, I think she’s a lesbian but refuses to cut her hair. Maybe she’s the lipstick lesbian, but I’m not sure if she wears lipstick.)

Speaking of Kim Davis, why do gays want to get married so badly? Don’t they know that 50% of all marriages end in divorce? Hasn’t Kim Davis been married four times? I think she’s doing gays a favor by refusing to give them marriage licenses. If anyone knows how bad marriage can be, Kim Davis does (her exes probably know even better).

As they say, marriage is a great institution, but who wants to live in an institution? Or are gay institutions more fun than straight ones? They certainly have fun parades.

On the issue of divorce, didn’t Jesus condemn divorce?

Did Kim Davis conveniently skip these passages about divorce? If the Bible condemns both divorce and homosexuality, why is it ok to get divorced but not to be gay?

Some bible thumpers argue that gay marriage will destroy the sanctity of marriage, but hasn’t divorce pretty much done that already?

If there is a gay agenda, and if marriage is part of the gay agenda, why do people like Kim Davis feel compelled to condemn it? Didn’t Paul repeatedly warn the Romans not to judge others:

And this vociferous admonishment:

“You may think you can condemn such people, but you are just as bad, and you have no excuse! When you say they are wicked and should be punished, you are condemning yourself, for you who judge others do these very same things.” (Romans 2:1).

Even if you believe strongly that homosexuality is wrong, how can you ignore that passage? Was it written in invisible ink in Kim’s bible?

“Remember, we will all stand before the judgment seat of God.”

It seems to me that having been married four times, Kim will have some explaining to do when she reaches the judgment seat. But I won’t judge.

Finally, if there is a gay agenda, isn’t it really just about individual freedom and personal happiness? Doesn’t Hebrews 13:1 say “let brotherly love continue?” And why shouldn’t gays be happy? For one thing, if they are going to burn in hell after they die, as people like Mike Huckabee seem to believe, why shouldn’t they be allowed to be as happy as possible now? I’d live it up on earth if I was condemned to eternal damnation. Damn straight. Maybe that explains the gay pride parades. I might march in the next one if I’m allowed to, but I’ll have to dig out a lipstick and infinity scarf first.

Could someone please send me a copy of their gay agenda so I can get some answers?

1 thought on “Questions about the Gay Agenda”